Tokyo, Japan, May 9, 2018―Toyota Motor Corporation (TMC) announced its financial results for the fiscal year ended March 31, 2018 in a press conference today. Video from the press conference is available below.

Hello everyone, and thank you very much for taking the trouble to join us today.

First of all, I would like to express my deep appreciation to each and every one of our customers who have chosen our vehicles around the world and to all our dealers and suppliers who have made tremendous efforts to provide ever-better cars.

I would also like to express my sincere gratitude to our shareholders and business partners around the world for their daily support of Toyota.

We have just announced our financial results for the fiscal year ended March 2018. Last year, while speaking on this same occasion and announcing our forecast for two straight years of decline in operating income, I used a sporting analogy and mentioned that "a losing streak is unacceptable."

The reality is that the notion of high operational costs have emerged as an issue to tackle, and I believe that if we repeatedly ask "Why, why?" pursue the root cause, take the right actions, and continuously improve, we will, without a doubt, be able to move forward.

The Toyota Production System, or "TPS," and our approach to cost reduction are Toyota's true values.

One of the basic principles of TPS is "to reduce costs rather than operate on a cost basis." This means that, rather than setting prices by adding reasonable profit to cost, the only thing that we can do is lower costs, based on the key premise that sales prices are determined by the market, in other words, by our customers.

Keeping an eye on costs means keeping an eye on what we do. Each and every person, armed with an awareness of costs and a grasp of current market levels, must thoroughly eliminate waste in their daily actions. What used to be the norm had somewhere along the way ceased to be so. Realizing this has led to a new start.

In all workplaces, there is a call to action to fundamentally review fixed costs. We have begun steady cost-reduction efforts in which each and every cost, whether it relates to daily tasks or large events or projects, is being scrutinized, with everyone thinking about what elements actually represent waste.

Especially, in the field of technology, TNGA has now entered its second round. While maintaining the better designs and enhanced performance achieved in the first round, we are now focusing on activities to lower costs.

In addition to ascertaining the specifications and performance that match the needs of our customers in each region and to thoroughly addressing costs, we have introduced the TPS principles of standardized work on the development side as part of our efforts of determining the necessary time and cost per unit of output to shorten development lead times.

With a strong determination to avoid "a losing streak," I believe that the accumulated results of steady, earnest, and thorough cost-reduction efforts, involving everyone, have begun to steadily become apparent in our financial results little by little.

As such, to sum up our latest financial results in my own words, I would like to suggest that they are results in which the true character of Toyota of endless continuous improvement is starting to be reflected.

As I have been saying on various occasions, the automotive industry is now hurtling into an era of profound transformation, the likes of which come only once every 100 years. With even our rivals and the rules of competition also changing, a life-or-death battle has begun in a world of unknowns.

Technology companies, who are our new rivals, with speed many times greater than our own and backed by abundant funding, are continuing to aggressively invest in new technologies.

As we sharpen our cost-reduction capabilities and enhance our earning power, Toyota, too, is expanding its investment in new technologies and in new fields. Additionally, we are strengthening our alliances, not only within the Toyota Group but also with other companies inside and outside our industry.

Our alliances are not for expanding our scale through capital, but for aiming to achieve a better society of mobility through open collaboration with partners who share our aspirations.

I believe that what is more important than being the first to introduce new technologies to the world is developing technologies that can most contribute to the realization of a society of mobility in which all people can move freely, safely, and enjoyably.

My thinking is that the more we advance new technologies, such as those related to electrification, automated operation, and connectivity, the broader the potential of automobiles will become. This will lead to an era in which Toyota's strengths can be more fully employed.

What will be required in the era to come is anticipating customer needs and providing customers with more personal mobility in a more direct and timely manner. In other words, it will be a world in which the services that are needed are provided when needed and only in the amount needed. Such is precisely a world of "just in time," as found in TPS.

To realize "just in time" services, simply linking automobiles to networks is not enough. It is necessary that all manufacturers, dealers, and alliance partners that provide services are connected to each other through waste-free, lean operations.

And now, of course our dealers included, we are taking up the challenge of greatly reducing lead times needed for providing services by introducing TPS-based operations at workplaces related to Toyota's mobility services.

As I have come to mention, Toyota's strengths are TPS and our approach to cost reduction. They are what gives us a competitive edge, and thoroughly honing both of them, which could be said to be our specialties, will not only allow us to survive the current era, but are also important even more so for surviving into the future.

Finally, I would like to share with you my resolve in embarking on our battles in a world of unknowns.

I have decided to "redesign" Toyota from a car-making company into a mobility company. A mobility company is a company that provides services related to movement for people around the world.

The significance in this is that it represents a fork in our current path of adherence to convention as well as the choice of a future in which the path is created by one's own hands.

I view this once-in-a-century era of profound transformation, the likes of which come only so often, as a major opportunity, and I approach it as an endeavor to create a new future ourselves with unprecedented speed and imagination.

Even until now, to flexibly respond to changes to our work environment and to grow sustainably, we have introduced new organizational structures, such as our in-house company system. However, what has most invigorated me is the change we made to our executive line-up in January this year.

To illustrate, the last eight years since my appointment as president in June 2009 have felt like racing on a circuit. In other words, it was as if I, alone, had climbed into the driver's seat of a giant company called Toyota and, relying on my own sensors, tried to drive as fast as possible through a fixed course. What I felt during that time was how difficult it is to innovate a giant company that has already seen success.

With the rules of competition as well as our rivals changing, I felt the necessity to change how Toyota is steered, I bumped up our revision to the executive line-up from April, when we traditionally made revisions, to January and formed a management team centered on myself and six executive vice presidents.

Furthermore, we fortunately had assigned to us our executive in charge of the Africa Region from Toyota Tsusho and our executive in charge of financing from Sumitomo Mitsui Banking Corporation. Outside board members proposed for appointment include Mr. Ikuro Sugawara, formerly of the Ministry of Economy, Trade and Industry, Sir Philip Craven, former president of the International Paralympic Committee, and Ms. Teiko Kudo of Sumitomo Mitsui Banking Corporation.

It is my expectation that these people, regardless of age, professional affiliation, gender, or nationality, will help pull us forward by contributing business knowledge cultivated in their various fields of expertise to Toyota's management, along with their views of the gap between Toyota and society as seen from the outside, among others.

One might say that it is comparable to switching the way one drives on a circuit to the way one drives in a rally. In a rally, a driver and a co-driver, in full coordination, compete in how fast they can drive on real roads full of changes. Even if the driver cannot see beyond the bend in the road, they put complete faith in the pace notes read by the co-driver and go on the attack at full throttle. The co-driver, employing previous experience and expertise, assesses conditions from the driver's perspective and navigates. Things won't work out unless both drivers have a relationship of mutual trust in which they put their lives in each other's' hands.

In other words, executive vice presidents who have experience as presidents at in-house companies or Toyota Group companies, and the outside board members who are experts in various fields, are, while navigating from the president's perspective as my co-drivers, veering us in a direction that will help us reach our goals faster.

Since January this year, various activities involving our workplace, centered on executive vice presidents and other executives, have already gotten underway. Please expect much from Toyota's coming transformation.

I think circumstances today parallel those 80 years ago.

And now, we, too, are aiming to "redesign" our corporate group. This battle is not being fought for our own sake. It is a battle for building a future society of mobility and for putting smiles on people's faces in the future.

With the sense of determination that stems from the belief that successors have to be challengers, I intend to take up every challenge in which I see have merit without fear of failing. Some things might not go well. Or, frankly, the things that do not go well might even outnumber the things that do go well, but fear can't hold one back.

By all means, I humbly request your support as we take up new challenges. 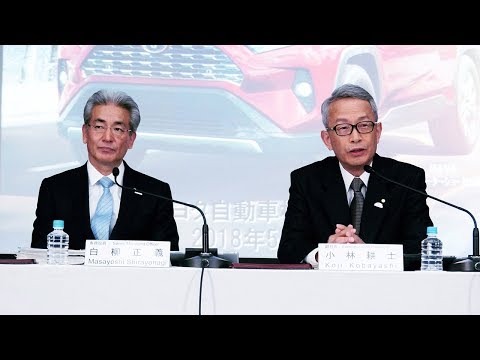 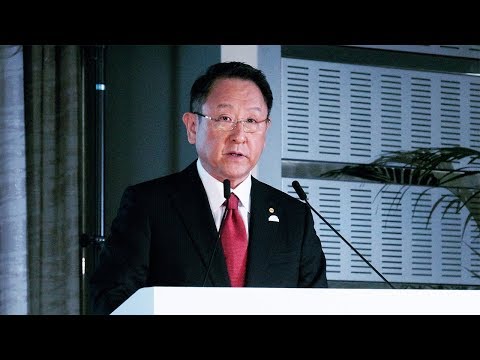