Toyota City, Japan, December 18, 2018―Toyota arrived at Toyota South Africa's Durban Plant last month, and so finished the Africa stage of its 5 Continents Drive Project. Launched in 2014, the project has now covered four of the world's continents. From spring 2019, the project will move to Asia and embark on the final stage of the project, starting in the Middle East.

In addition to Toyota employees, members from SUZUKI MOTOR CORPORATION, Hino Motors Ltd., and TOYOTA AUTO BODY Co., Ltd. also participated in the Africa stage of the project; a total of 76 people covered 10,600 kilometers over a period of two months. The team drove across Africa's diverse and wide-ranging roads, where they experienced first-hand the harsh conditions in which vehicles were used and listened to direct feedback from African customers. As a result, team members were moved to consider what it meant to make "ever-better cars," exchanged views with their colleagues, and devoted themselves to thinking about cars.

Driving across a variety of harsh, unpaved roads beset by severe unevenness, sharp stones, corrugated road surfaces, and desert, the team was made to recognize the value of reliability, durability, and comfort. Even on paved surfaces, Africa presented a unique road environment: long straights, frequent animal crossings, large potholes that appear out of nowhere, speed bumps, and overtakes by large numbers of heavy, overloaded trucks. These circumstances impressed upon the team the importance of braking performance, high-speed stability, and power and torque.

The 5 Continents Drive Project is a genchi genbutsu project (where employees go to the source to get the facts) carried out under the umbrella of TOYOTA GAZOO Racing1. Toyota employees from Japan team up with local affiliates, take the wheels of the cars themselves, and drive the roads used daily by their customers. By participating in the project, team members increase their knowledge of the world's roads, listen to customer feedback, encounter global cultures first-hand, and together find solutions to numerous problems and challenges. Such experiences enable them to hone their intuition for making ever-better cars in a manner that cannot be replicated at a desk or on test courses, and thereby contribute to the development of human resources.

Based on the knowledge they have acquired through genchi genbutsu, participating members have shown a desire to proactively drive Toyota's creation of ever-better cars forward. Indeed, some of the feedback from participants includes: "My experiences led me to review our vehicle evaluation items, and I have also taken advantage of them in my daily work"; "I rediscovered a sense of pride and responsibility in car-making"; "When making ever-better cars, I realized the importance of not being too focused on one's own functions, and of thinking of the vehicle as a whole"; and "The project has taught me that there is a gap between what I feel and what our customers feel―it has made me more attentive to customer feedback and reexamine what they have to say in a more impartial manner."

In spring 2019, Toyota will move to Asia and embark on the final stage of the 5 Continents Drive Project, starting in the Middle East.

1Toyota has participated in racing, which exposes cars to extreme conditions, as a way to "develop people." Indeed, it believes that motorsports activities are the key to making ever-better cars.

I am relieved to see that all the members who participated in this year's Africa stage of the 5 Continents Drive Project have returned in good health. To those of you who participated: Thank you for your hard work, and thank you for returning safe and sound.

The 5 Continents Drive Project was launched in 2014. Our motivation was for Toyota to become a company that makes ever-better cars and, to do this, we realized that we would have to better understand the world's roads.

At the beginning of the project, the core members of the team were from our technology divisions; over the course of the project's five years, however, members from a variety of other divisions―including our sales, purchasing, labor relations, and accounting divisions―have also taken part. An increasing number of younger employees have participated as well. The number of participants from our overseas affiliates has also grown. There is a strong sense that the circle of people who are undertaking the task of making ever-better cars with sincerity has now expanded across boundaries to include those from a wide range of divisions, positions, roles, and nationalities.

I, too, have played a part in this project, having driven roads on each of the continents we have visited. This year, I took the opportunity to participate in driving tests for the TOYOTA AUTO BODY Co., Ltd. Team Land Cruiser, the team taking part in the Dakar Rally, and in Morocco I drove across the desert for the first time ever.

On numerous occasions I got stuck in the middle of the desert, unable to move forward or backward; and the more I accelerated, the more the Land Cruiser I was driving sank into the sand.

In such diverse environments, car breakdowns pose unique challenges, possibly being life-or-death situations. The members who returned from the 5 Continents Drive Project drove across various roads in Africa, and likewise reported having such experiences of realizing just how important cars are.

In every division, and in every role, the mission of Toyota employees remains the same: to create ever-better cars.

No matter if you are the president or a new recruit, whether you are an engineer, work on the shop floor, or in administration―there are no boundaries, and your mission does not change.

All the work you have carried out in an everyday manner―I would now like you to recall your experiences on African roads, and use that as you do your work. In doing so, you will become more expert at every job you do, and come closer to accomplishing Toyota's aim of truly making our customers happy and of making ever-better cars.

Also, if the jobs of those who participated in the project change, then the jobs of those around them will also begin to change. It may not be overly exciting, but I believe that in this way Toyota will evolve into a company that makes ever-better cars. To everyone who participated in the project: I hope you will do your best, and I look forward to seeing the results of your efforts.

The Africa stage of the 5 Continents Drive Project was not carried out by Toyota alone; this time, we drove together with participants from SUZUKI, Hino Motors, and TOYOTA AUTO BODY.

These companies are partners who share the same vision of creating ever-better cars that put a smile on the faces of our customers, and who have a desire to shape the future of mobility. Naturally, there are no boundaries here, either.

Together, we have gained an understanding of the severity of roads, and have listened to the voices of our customers. These experiences will benefit us all in the future. Together, let us promote the creation of ever-better cars. And, let us seek to build a future in which as many of our customers as possible can find happiness.

Past Legs of the 5 Continents Drive 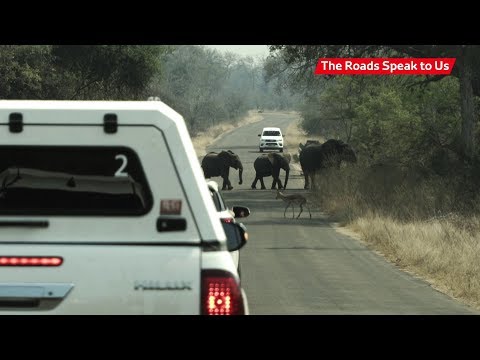