Toyota City, Japan, July 1, 2020―Toyota Motor Corporation (Toyota) announced today that it has developed a new Acceleration Suppression System, in addition to its existing system, to help further deter serious accidents and reduce damage caused by misapplication of the accelerator pedal. On July 1, Toyota launched this system as "Plus Support" for new cars and added the function in the "Pedal Misapplication Acceleration Control System II" retrofit device for use with existing cars.

These existing systems help prevent accidents caused by accelerator pedal misapplication when sensors detect obstacles such as a wall or glass. According to data confirmed by Toyota, ICS helps prevent roughly 70 percent of all potential accidents that could occur due to accelerator pedal misapplication. However, new technologies needed to be developed to reduce the remaining number of accidents, including accidents in situations where obstacles are absent.

Further information regarding Plus Support and Pedal Misapplication Acceleration Control System II that offer the Acceleration Suppression Function is as follows.

Examples of Prius and Prius PHV with pedal misapplication prevention functions, including Plus Support

By combining its existing ICS and retrofit device functions with the Acceleration Suppression function, Toyota believes it can further reduce the number of serious accidents caused by pedal misapplication in parking lots and other areas. This will enable customers, especially those worried about possible pedal misapplication accidents, to enjoy greater safety and security.

Toyota is not developing and selling these functions for Toyota vehicles alone, but has extensively shared the operational logic of the Acceleration Suppression function with other Japanese auto makers.

The declining trend in the number of road traffic fatalities in Japan notwithstanding, more than 3,000 precious lives are still lost every year. Led by the belief that "the first step in joyous mass production is safety," Toyota intends to contribute to the elimination of traffic fatalities and injuries―the ultimate goal of a mobility society―using a three-pillar approach: 1) through improvements to car safety; 2) through educational initiatives to help inform people, such as the Support Toyota programs that promote further understanding of safety functions; and 3) through activities that seek to improve road traffic environments. At the same time, Toyota Would like to contribute to the Sustainable Development Goals (SDGs)*4 specified by the United Nations, through the approach to safety.

SDG targets that can be particularly contributed to through this initiative 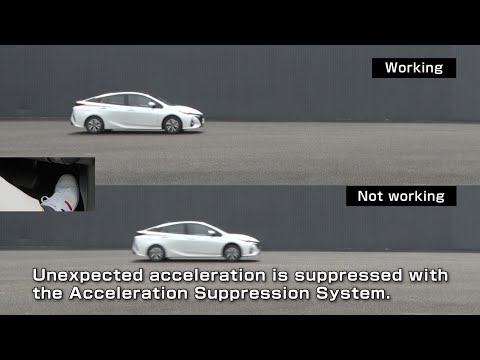