Once the deal is closed, the CARMERA team will report into the Automated Mapping Platform ("AMP") organization of Woven Alpha, Inc. ("Woven Alpha"). Woven Alpha focuses on exploring new strategic areas for business expansion and incubates several innovative projects such as Woven City and Arene, which is Woven Planet's open software platform. AMP is a connected crowdsourced software platform that supports the creation, development and distribution of high definition ("HD") maps―a key enabler for smart and safe automated mobility.

The Woven Alpha team plans to develop AMP to become the most globally comprehensive road and lane network HD map platform, enabling high-precision localization support to automated vehicles. The acquisition of CARMERA will accelerate AMP's shift from the R&D stage to the next phase of commercialization by bolstering the platform's engineering team with top experts in the development of HD maps. In addition, it will provide access to CARMERA's sophisticated map update, change management and IoT sensing technology.

Together, the teams will tap into CARMERA's ability to successfully update HD maps from crowdsourced, camera-based inputs―a significantly cheaper and faster approach than traditional methods. This will strengthen AMP's ability to serve a comprehensive set of road classes and features, reflecting changes in lane markings, traffic signals, signs and more in near real-time, and support its future multi-regional commercial launch.

CARMERA will join Woven Planet Group as a wholly-owned subsidiary, expanding the company's footprint beyond its Tokyo headquarters by adding New York and Seattle offices to its planned offices in Silicon Valley and London.

"AMP has been a key project of Woven Planet since its foundation, helping support its vision of 'Mobility to Love, Safety to Live.' We've been progressing steadily in bringing safe automated mobility to the passenger and commercial vehicle segments, such as our recent announcements with Isuzu Motors Limited and Hino Motors, Ltd., and with Mitsubishi Fuso Truck and Bus Corporation. I'm really excited to welcome CARMERA to Woven Planet. With CARMERA joining the team, we'll be able to hit the accelerator. CARMERA's software stack, which is focused on real-time HD map changes and proprietary hardware custom-tailored to crowdsourcing, is an ideal complement to AMP's mapping efforts. In addition, their world-class experts will allow us to bring forward the execution of key strategic milestones and jumpstart operations in the United States."

"Woven Planet and AMP have been highly aligned with CARMERA's culture and mission from the beginning. Our teams have a common view of the unmet need for ubiquity in advanced mobility data going forward, including maps. Woven Planet, thanks to its software-first automotive DNA, shares our commitment to the end-user―to creating a technology stack that can be used safely and without friction by all stakeholders from data originators through to data consumers. This validates and furthers our founding thesis that richer, faster spatial intelligence is both critical to the next generation of 'Mobility for All' and viable at global-production scale. I'm beyond excited for CARMERA to join the Woven Planet organization, as it continues to strengthen its footprint in North America and ramp up its software-first development of mobility innovations."

An earlier partnership between Woven Planet―under its predecessor organization Toyota Research institute - Advanced Development, Inc.―and CARMERA in Tokyo, Detroit and Ann Arbor, Michigan, laid the groundwork for this deal. Woven Planet and CARMERA participated in collaborative projects in 2018, 2019 and 2020, which proved the companies can successfully develop and update HD maps from commodity, device-agnostic sources, such as commercially available dashboard-mounted cameras.

Woven Planet Group represents a carefully curated blend of expertise and resources dedicated to bringing the vision of "Mobility to Love, Safety to Live" to life. Through innovations and investments in automated driving, robotics, smart cities, and more, we are transforming how humankind lives, works, and moves. We exist to design, build, and deliver secure, connected, and sustainable mobility solutions that benefit all people worldwide. Founded in 2018 as Toyota Research Institute - Advanced Development (TRI-AD), Woven Planet Group is composed of four complementary companies: Woven Planet Holdings, Woven Core, Woven Alpha, and Woven Capital.

CARMERA is a spatial AI company, built on the revolution of vehicular crowdsourcing and remote sensing to capture street-level change, at global breadth and high definition depth. CARMERA employs an open systems approach to working with the world's leading automotive companies, commercial mobility operators, and mapping platforms. With a team hailing from leading geospatial, machine learning and computer vision organizations, and venture backing from GV (Google Ventures) among others, the company is headquartered in New York City and Seattle. CARMERA is the recipient of multiple industry awards, including Frost & Sullivan's 2020 North American Mapping Company of the Year. 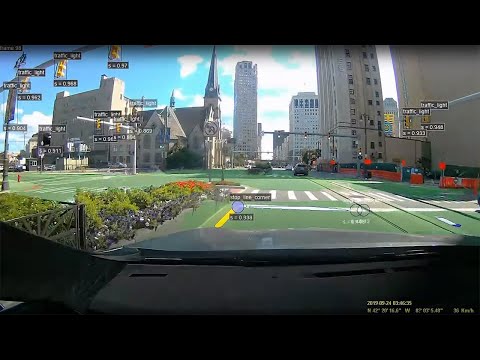 Proof of Concept in Detroit