January 31, 2018―Lexus International announced today the 12 finalists for the prestigious Lexus Design Award 2018. Now in its sixth year, this distinguished international design competition invites young designers to propose ideas based on this year's theme "CO-", derived from the Latin prefix meaning "with or together in harmony". "CO-" explores the possibilities of how design can seek solutions and overcome barriers for a range of global challenges by harmonious integration of nature and society.

This year's Lexus Design Award involved an unprecedented level of participation attracting over 1300 entries from 68 countries. Sir David Adjaye, one of the judges remarked "It has been thrilling to gain insight into how the next generation of designers translate new concepts and philosophies into innovative solutions to the fundamental concerns of today." Past Lexus Design Award finalists and winners have garnered further success including 2014's "Iris" by Sebastian Scherer that won the German Design Award 2016 and 2015's "Sense-Wear" by Caravan that won Venice Design Week's Wearable Technologies Contest in 2016.

Twelve finalists were chosen after considerable deliberation by a panel of prestigious judges which was further strengthened this year with the addition of world renowned architects David Adjaye and Shigeru Ban. Among the 12 finalists, four, listed below, were selected to prototype their designs under the guidance and mentorship of an elite team of established creators: Lindsey Adelman, Jessica Walsh, Sou Fujimoto and Formafantasma.

The four prototypes and detailed presentation boards from the other eight finalists' designs will be showcased as part of the Lexus Design Event at this year's Milan Design Week* in April. The 12 finalists will present their work to the judging panel and international media. Following the presentation, a Grand Prix Winner will be selected.

More information and high-resolution pictures can be found on

Further details on the Lexus presence at 2018 Milan Design Week* will be announced in mid-February on the Lexus Design Event website.

Sir David Adjaye / Architect Sir David Adjaye OBE is the principal and founder of Adjaye Associates. Born in Tanzania to Ghanian parents, his broadly ranging influences, ingenious use of materials and sculptural ability have established him as an architect with an artist's sensibility and vision. His largest project to date, the $540 million Smithsonian Institute National Museum of African American History and Culture, opened on the National Mall in Washington DC in fall of 2016 and was named Cultural Event of the Year by the New York Times. In 2017, he was knighted by Queen Elizabeth II and was recognized as one of the 100 most influential people of the year by TIME magazine.

Paola Antonelli / Senior Curator MoMA Paola Antonelli is Senior Curator of Architecture & Design at The Museum of Modern Art, as well as MoMA's founding Director of Research & Development. Her goal is to promote design's understanding, until its positive influence on the world is universally acknowledged. Her work investigates design's impact on everyday experience, often including overlooked objects and practices, and combining design, architecture, art, science and technology. She has curated numerous shows, written several books, and lectured worldwide. She has taught at the University of California, Los Angeles; the Harvard Graduate School of Design; and the MFA programs of the School of Visual Arts in New York. She is currently working on an exhibition on the 111 garments that changed the world; on Design Bites, a book about foods from all over the world appreciated as examples of design; and on a book collecting her essays on the different fields of contemporary design.

Birgit Lohmann / Chief Editor of designboom Born in Hamburg, Lohmann studied industrial design in Florence before moving to Milan, where she has lived and worked since 1987. She worked as a designer and product development manager for a number of Italian architects and master designers. She has also worked as a design historian for justice departments and international auction houses. As a researcher and lecturer, she has conducted seminars on industrial design at a number of prestigious international universities. In 1999, she co-founded designboom, where she is currently the Chief Editor, Head of Educational Programming and Curator for International Exhibitions.

Alice Rawsthorn / Design Commentator Alice Rawsthorn is an award-winning design critic, who has written about design for the New York Times for over a decade. Her latest book Hello World: Where Design Meets Life explores design's impact on our lives. Her next book, A Field Guide to Design, is to be published in spring 2018 as a survey of design today. Alice speaks on design at important global events including TED and the World Economic Forum's annual meetings at Davos, Switzerland. Based in London, she is chair of trustees of the Chisenhale Gallery and the contemporary dance group Michael Clark Company, and a trustee of the Whitechapel Gallery. Alice was awarded an Order of the British Empire (OBE) for services to design and the arts.

Yoshihiro Sawa / President of Lexus International Yoshihiro Sawa graduated with a Bachelor of Science degree in Engineering and Design from Kyoto Institute of Technology. He has held a number of design-related positions since joining Toyota Motor Corporation in 1980, including Chief Officer of Global Design, Planning Division. He became President of Lexus International in April 2017.

Lindsey Adelman / Designer Decades before founding her eponymous studio, Lindsey Adelman was already designer―just not publicly so. First, she was simply a precarious, curious child, building endlessly in the backyards of suburban New York, uncertain of how to make a career of it; then, an English student at Kenyon College; then, on the editorial staff at The Smithsonian Institution. Fortunately, there, her accidental discovery of industrial design―in the literal form of a fabricated foam French fry―propelled her off to RISD to make a life of that childhood passion. Today, from her studios in New York and Los Angeles, she manipulates light to create fixtures that are as emotive as they are physically transformative―objects imbibed with their own history and meaning, often unselfconsciously so, that give color and texture and depth to the world around them.

Formafantasma / Designer Andrea Trimarchi and Simone Farresin are Studio Formafantasma, Italian designer duo based in Amsterdam, Netherlands. They have developed a coherent body of work characterized by experimental material investigations and explored issues such as the relationship between tradition and local culture, critical approaches to sustainability and the significance of objects as cultural conduits. Their work has been presented and published internationally and museums such as New York's MoMA, London's Victoria and Albert, New York's Metropolitan Museum, the Chicago Art Institute, the Textiel Museum in Tilburg, the Stedelijk's-Hertogenbosch, MUDAC Lausanne, the Mint Museum of Craft and Design in North Carolina and the MAK Museum in Vienna have all acquired Formafantasma's designs for their permanent collections. Andrea and Simone are lecturing and heading workshops in various Universities and Institutions. Currently teaching at the 'Well Being' and 'Contextual Design' Departments of the Design Academy Eindhoven and they are at the head of the Design bachelor at MADE Program in Siracusa, Italy.

Sou Fujimoto / Architect Sou Fujimoto was born in Hokkaido in 1971. Graduated from the Department of Architecture, Faculty of Engineering at Tokyo University, he established Sou Fujimoto Architectsin 2000. In 2016, he has won the 1st prize for "Pershing", one of the sites in the French competition called 'Réinventer Paris', following the victories in the Invited International Competition for the New Learning Center at Paris-Saclay's Ecole Polytechnique and the International Competition for the Second Folly of Montpellierin 2014. In 2013, he became the youngest architect to design the Serpentine Gallery Pavilion in London. His notable works include; "Serpentine Gallery Pavilion 2013" (2013), "House NA" (2011), "Musashino Art University Museum & Library" (2010), "Final Wooden House" (2008), "House N" (2008) and many more.

Jessica Walsh / Designer Jessica Walsh is a designer & art director working as a partner at NYC based design firm Sagmeister & Walsh. She lectures about design at creative conferences and universities internationally and teaches design at The School of Visual Arts in NYC. Her work has won numerous awards from most major design competitions including Type Director's Club, Art Director's Club, SPD, Print, New York Festivals, D&AD, TDC Tokyo, and Graphis, among many others. She has been awarded Forbes "30 under 30 top creatives designing the future" and Ad Age's "Top 10 Visual Creatives". Her work has been featured in numerous books & magazines. Clients include the Museum of Modern Art, The Jewish Museum, Jay-Z, Snapchat, Barneys, The New York Times, Levis, Adobe, and The School of Visual Arts. She hosts mentorship programs for creative women through her initiative Ladies, Wine & Design; which has spread to over 110 chapters around the world. Her blog & book "40 Days of Dating" received over 10 million readers and is currently being turned into a movie by Warner Brothers.

First launched in 2013, the Lexus Design Award is an international design competition that targets up-and-coming creators from around the world. The award seeks to foster the growth of ideas that contribute to society by supporting designers and creators whose works can help to shape a better future. It provides a unique opportunity for four finalists to work with globally recognized designer as a mentor to create prototypes of their designs, and then exhibit them at one of the design calendar's most important events.

Since its debut in 1989, Lexus has earned a worldwide reputation for high-quality products and exemplary customer service. Lexus is the hybrid leader among luxury brands, offering hybrids that provide the best in innovative technology and premier luxury. The evolution of Lexus is reflected in the progressive designs of its new vehicles. The signature spindle grille, dynamic light treatments and sculptured lines create a distinctive look of luxury for Lexus. 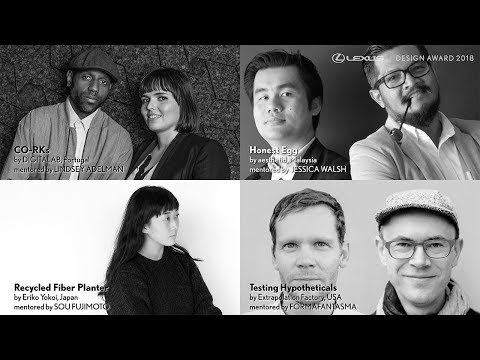