As the pillar of next-generation environmental vehicles, the new Prius PHV boasts an EV mode range of 68.2 km, more than double that of its predecessor

Toyota City, Japan, February 15, 2017―Toyota Motor Corporation announces the launch of the redesigned Prius PHV in Japan, and sales will begin at all Toyota, Toyopet, Toyota Corolla and Netz dealers nationwide on February 15.

Toyota has been working on enhancing its product lineup significantly, and is positioning plug-in hybrid vehicles (PHVs) as the pillar of next-generation environmental vehicles after hybrid vehicles (HVs).

With the new Prius PHV, Toyota has greatly advanced on the environmental performance that is characteristic of the Prius lineup, along with the powerful and smooth drive which is an attribute of an electric vehicle (EV). Futuristic advanced equipment has been added and charging convenience greatly improved, thus evolving the new Prius PHV into a prime vehicle.

During short-distance drives, such as daily commuting and shopping trips, a plug-in hybrid operates as an electric vehicle (EV) and does not consume any gasoline. At the same time, it can be driven over long distances as a hybrid vehicle (HV) even after the battery charge is depleted. Toyota positions PHVs as the core vehicle segment in the company's Toyota Environmental Challenge 2050―where the goal is to achieve a society in which cars, people and the environment co-exist harmoniously - and plans to continue strengthening this product line. 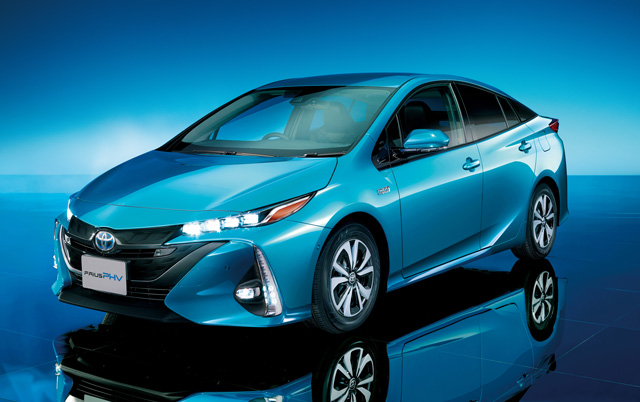 New Welcab versions (special features have been installed by Toyota) will also be launched in April. A new model with a rotating and tilting front passenger seat makes it easier for a person requiring assistance to get in and out of the vehicle, thus easing the burden on the caregiver.

1Regardless of the remaining battery charge, the EV driving mode may automatically be switched over to hybrid driving mode depending on the state of the engine and traction battery, air conditioner usage, driving mode (rapid acceleration, exceeding the set vehicle speed), and road conditions (hill climbing). Based on the JC08 Japanese test cycle for EV mode range (on a fully charged battery) and verified by the Ministry of Land, Infrastructure, Transport and Tourism of Japan

2Under the Japanese Ministry of Land, Infrastructure, Transport and Tourism's JC08 test cycle

3Standard on all grades, except for S. Manufacturer option on Grade S.

5Standard on all grades, except for S.

*Includes consumption tax, does not include recycling fees, and differs in Hokkaido and Okinawa.

*Includes consumption tax, does not include recycling fees, and differs in Hokkaido and Okinawa.

A sharp futuristic face with an advanced look has been made possible with a large grille featuring clear acrylic resin and quad LED headlights. The headlights are equipped with the Adaptive High-beam System, which recognizes other vehicles, based on the taillights of the vehicle ahead and the headlights of on-coming vehicles, and shields them from the high-beam light by controlling the light-projection areas using 16 LEDs located on the left and right sides finely.

The rear design is a distinctive feature of the Prius PHV, which includes the "double-bubble" glass in the rear window, high-mount brake lights connected by a single red line, and rear combination lamps.

For the first time in a Toyota brand vehicle, the rear hatch uses CFRP14, which allows for its unique outline and light weight.

A longer rear overhang has been utilized to achieve a carefree and speedy profile.

A total of nine colors are available, including the newly developed, exhilarating, and attractive Spirited Aqua Metallic.

8As of February 2017. According to Toyota Motor Corporation.

9If a grounded outdoor outlet is available, it can also be used. A locking electrical outlet must be replaced with a high-durability outlet.

11Nippon Charge Service LLC
The company was established by four Japanese automobile manufacturers, including Toyota, in order to promote the establishment of a charging network, with the goal of popularizing electric vehicles.
Websitehttp://www.nippon-juden.co.jp/

12Offered as standard in all grades, except for S. Available as an option in the S grade

13Maximum amount of charge generated by the solar charging system while the vehicle is parked, converted into travelling distance according to the JC08 Japan test cycle. Calculated based on the Japan Photovoltaic Energy Association Labeling Guidelines (FY2015), taking into account the various losses incurred in on-board systems. Solar radiation amount calculated based on the daily data in an average year between 1990 and 2009 in the Nagoya district (source: NEDO).

16This assessment structure was introduced by JNCAP in FY2015. It assesses the performance of automatic braking systems that support avoidance of collision with vehicles and pedestrians ahead, lane departure alarms, and systems that provide rear view information.

Link to the "Prius PHV" webpage (Japanese only)
http://toyota.jp/priusphv/

Link to the "Prius PHV Welcab" webpage (Japanese only)
http://toyota.jp/priusphv/welcab/