Toyota Commemorates Induction of Kiichiro Toyoda into Automotive Hall of Fame in U.S.

Toyota City, Japan, August 6, 2018―Toyota Motor Corporation (Toyota) held a ceremony today at its headquarters in Toyota City commemorating the induction of Toyota founder Kiichiro Toyoda into the Automotive Hall of Fame in the United States as part of this year's induction class. (For details of the induction, please click here.)

Approximately 100 people attended the ceremony, which, in addition to Toyota executives and representatives of the Toyota National Dealer's Advisory Council, Kyohokai, Eiyokai, and Toyota Group member companies, included―for the passing down of the spirit of Kiichiro Toyoda and others at the time of the company's foundation―young employees from each group company.

Toyota Chairman Takeshi Uchiyamada and Senior Managing Officer Jim Lentz, who attended the induction ceremony in Detroit in the United States on July 19, reported on the induction, and Honorary Chairman Shoichiro Toyoda and President Akio Toyoda, in remembrance of Kiichiro Toyoda and the other leaders at the time of the company's foundation, addressed today's gathering as detailed below.

"Eiji Toyoda was inducted into the Automotive Hall of Fame in the U.S. in 1994, and I was also inducted in 2007. It is a tremendous honor and one that fills me with great joy that the induction this year of Kiichiro, who took up the challenge of shifting from the loom business to the car business, stems from the high evaluation in America, which can be called the 'mother' of the automobile, of his achievements as founder at the time of our company's foundation.

"Kiichiro used to say: 'When it came to loom technology, I am confident that we were the best in the world. But, as for automobiles, I didn't do a thing. It was my subordinates and those around me who did it.' Within those words were feelings of appreciation based on Kiichiro's belief that 'The automobile business is not something that one person alone can undertake. We were able to accomplish what we did only because many people came together and worked hard.'

"It was after the war that Kiichiro yet to accomplish what he had set out to do, fell ill and never lived to see that for which he had aimed: the creation of an authentic passenger car for the masses. Those dreams and aspirations were inherited by the subordinates who shared his dreams, resulting in the birth of the Crown in 1955.

"Since then and to this day, the practice of genchi genbutsu (go and see to find the facts), an understanding that prices are determined by the market and that we should tirelessly endeavor to reduce costs, the building of quality into one's own processes, or jikotei kankestsu, the taking up of challenges for innovation, and the cultivating of the human resources who will assume responsibility for these things have formed the driving force of our development. All of these represent the thinking and stance behind Kiichiro's approach to making cars since the time of our foundation. As such, Kiichiro lives on as part of Toyota Motor Corporation and the Toyota Group today."

"Because Kiichiro passed away at the young age of 57, I never had the chance to meet him. But, even in the case of the honor recently bestowed on him, I believe he would have said: 'Because it took all of us working together to make cars, being inducted into a hall of fame, too, is something we will do together. My name exists just to represent you.'

"When I think of Kiichiro and our predecessors, there are always two things that come to mind. One is a feeling of appreciation, as, if it were not for them, the Toyota we know today would not exist. The other, nonetheless, is a sense of regret, as none of them were able to experience, for the most part, the good times that were to come.

"That is why I am happy, more than I would be for myself, that their days of effort and challenge have been recognized by induction into the Automotive Hall of Fame in America, a country that they all admired.

"We exist today precisely because, for the future of Japan, Kiichiro and all the people who supported us at the time of our foundation took up the challenge of making cars, which at the time was said to be impossible. If we who were handed the baton had only always talked about risks without taking up any challenges and only did what was safe, we would be, in front of both our predecessors and members of the next generation, hard pressed to find an excuse.

"To make a future society of mobility more enjoyable and prosperous, I, myself, will stand at the forefront and continue the fight. And I pledge that I will firmly pass on to those who are younger the idea, which is the origin of our company's foundation, of committing oneself to the struggle, not for oneself, but for society and for smiles on the faces of the next generation." 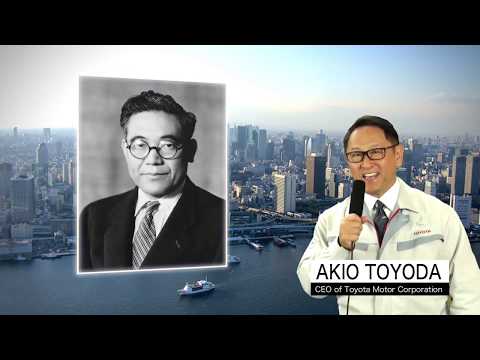