Why is Toyota Developing Humanoid Robots?

Have you ever heard of T-HR3?

First launched by Toyota in 2017, it's a humanoid robot capable of flexible movements that mirror the actions of its remote human operator, and of sharing the force exerted by and on the robot with the operator using force feedback.

The new and improved T-HR3, which the company will demonstrate at the 2019 International Robotic Exhibition in Tokyo, is now able to execute more difficult tasks than before, including walking in a more natural manner.

What new robotics functions did the development team achieve, and what kind of future does Toyota hope to realize with this research? One lucky Toyota PR team member met with T-HR3 Development Team Leader Tomohisa Moridaira to find out.

Moridaira leads a research and development group based inside Toyota's Tokyo Head Office building, and his team also works on the development of the Tokyo 2020 Mascot-type robots (Mascot robots), which are being jointly developed with the Tokyo Organizing Committee of the Olympic and Paralympic Games.

Can you please explain what is new on the updated T-HR3?

We have also made a number of minor updates to the T-HR3 robot as well.

In other words, you have made the movement of the robot's fingers more precise, and you've made the Master Maneuvering System easier to control?

Yes, and the best way to understand is by experiencing it. Please put on the Master Maneuvering System.

This is my first time getting to control a robot! I'm so excited. The Master Maneuvering System doesn't feel so heavy to wear, and it's cool.

It looks good on you. First of all, please move your arm. You will see that the robot displayed inside the VR goggles moves the same way that you do.

You're right! The robot is moving exactly the same as I am. I've never experienced anything like this.

There's a sense of touch from each finger. It's like my real fingers. I can also feel the sensation of shaking hands through how the arm is moving. This is wonderful.

Previous models couldn't provide feedback to each finger like this, but now you can do more delicate work like picking up a coin.

Yes, I would like to! Oh wow, I can walk naturally right from the start. It's not quite the same as walking normally, but I can easily control it without thinking about it. I feel like I need to explain what this mysterious feeling is like. I just sit down and move my foot, and then the robot moves forward. It even changes direction.

In fact, the controller works the same way when you're actually walking. We would like the users to give walking instructions as intuitively as possible, so we designed the robot to follow the instructions while keeping its balance.

It must be important to develop robot in parallel with Master Maneuvering System.

That's right. Given the services that we're thinking of offering in the future, it's very important that everyone can control the robot without much difficulty.

(Future service offering? We definitely want to hear more details about that later.)

Why is Toyota developing humanoid robot?

Ok, I understand how you have updated T-HR3. But can you help people understand why you start developing humanoid robots in the first place?

When we consider how robots will be used in the future, we think that there will be high demand for robots that make effective use of many joints to accomplish delicate tasks, the way humans do, and that can operate safely even when they are in contact with the world around them.

In that kind of scenario, it is vital that these robots possess redundant degrees of freedom. It goes without saying that we faced numerous development challenges, but we believed these technologies would be necessary, and so we launched the development of humanoid robots as a typical redundant model.

I'm sorry, what does "redundant degrees of freedom" mean?

It's a functional capability that gives a robot extra degrees of freedom in addition to the minimum degrees of freedom necessary for a task. So, for example, a robot arm that has many joints can continue to work even if a few of the joints stop working for some reason.

In addition to make up for some malfunctions, having redundant degrees of freedom allows for greater diversity in how the robot can move, including allowing it to scoop up from under an object or to take it from the side. It's interesting to see the difference in how the robot moves depending on operator personality or skills.

I assumed it was like a back-up in case of an emergency. I understand what you mean by redundant degrees of freedom and why it is important, but why does the robot need to be human shape in the first place?

It is often said that a human shape is useful because the robot can use the same tools and environment as a human, but one more big reason is that humans find it to be easiest to control robots in humanoid form. For proof, consider that you tried the Master Maneuvering System for the first time just now and you could control it without any special training.

Yes, you are right!

Thanks to VR, there's no doubt that people have already experienced what it feels like to have their movements represented in a virtual world. As an extension of this, avatar robots like T-HR3, which possess an actual body, are capable of going beyond VR to physically influence the real world. Of course, we still have to overcome mountains of development issues, but in the future, people will be able to extend their ability to move and experience the world using remote avatar robots―and the ability to offer new mobility services like this is a goal that is well suited to Toyota as it transforms into a mobility company.

At CES in January 2018, President Akio Toyoda declared: "It's my goal to transition Toyota from an automobile company to a mobility company, and the possibilities of what we can build, in my mind, are endless." Robots are one important example. Broadly speaking, Toyota intends to provide three types of mobility services through its robots: the first is "physical movement," when humans and objects actually move through space; the second is "virtual movement," when an operator's body or body part is virtually moved through a remote space via avatars or agents―T-HR3 is an embodiment of this; the third is "emotional movement," whereby the previous two modes of mobility provide people with new experiences and encounters and inspire them emotionally―Toyota sees this as a form of "movement" as well. For each of these three forms of mobility, Toyota has a team engaged in robot development.

A society in which everyone has a reason to live

I'm really looking forward to seeing how these new mobility service will be realized. Last question―can you please let me know about the current challenges you're working on, and about your future plans?

There are many issues that must be resolved before Toyota can begin to provide these new mobility services, such as further effective use of redundant degrees of freedom and developing lightweight maneuvering devices, but we will keep working to solve these challenges as soon as possible.

We hope that everyone will be excited about what the future holds for brand new kinds of mobility experiences. And beyond that, we think there are important applications for future issues like providing proper care for the aging population, including helping caregivers reduce travel time, which is a physical barrier, while increasing communication time via robots, or helping caretakers enhance their abilities to do more for themselves. We want to use the technologies we have developed to help realize a society in which everyone will be able to maximize the time they have and live active lives.

You can expect the great future as we continue to evolve Toyota's partner robots. Thank you for your time today.

Thank you very much!

Offering: the Tokyo Organizing Committee of the Olympic and Paralympic Games

Both the functionally upgraded T-HR3 and the Mascot Robots will go on display at the International Robot Exhibition 2019, which takes place at Tokyo Big Sight from December 18 to 21. The Mascot Robots are approximately puppet-sized―smaller than T-HR3―and feature many advanced technologies.

Some lucky visitors will have an opportunity to shake hands with the robots. We hope you take the time to visit the Toyota booth to meet T-HR3, the Mascot robots, and the development team.

Offering: the Tokyo Organizing Committee of the Olympic and Paralympic Games 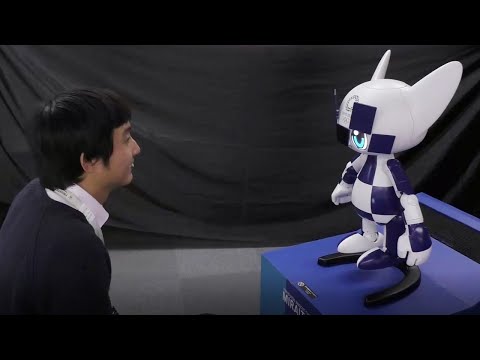 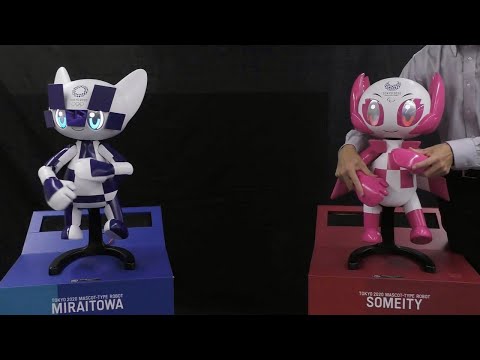 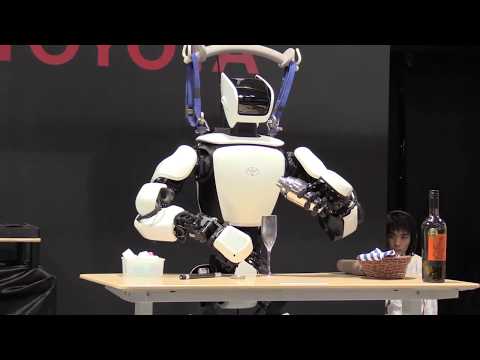 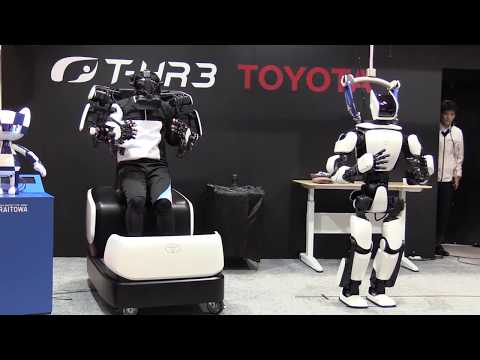