Toyota's roots are found in delivering happiness to all people. The aim of alliance of both companies is to build a platform for the future that can support a prosperous life for people with focus centered on people.President Akio Toyoda speech at Joint Press Conference by Toyota Motor Corporation and NTT Corporation

Toyota Motor Corporation and Nippon Telegraph and Telephone Corporation held a joint press conference in Tokyo on March 24, 2020. Click below to view the video.

Akio Toyoda's remarks regarding the alliance with NTT

Greetings. I am Akio Toyoda.

In other words, even when thinking about our business, it is necessary to have in mind the concept of connected cities, in which we need to think about things from a broad, car-inclusive, community-wide, and society-wide perspective, rather than viewing cars as a separate entity.

Against such a backdrop, it has come to pass that we have embarked on new collaboration with NTT. Please allow me to explain the reasons for our alliance with NTT from the perspective of two changes that we are facing.

One change that Toyota, itself, must address is a change in how software is positioned in monozukuri.

In recent years, to secure a degree of development freedom and to improve product competitiveness, the concept of "software first", in which hardware and software are separated and software is developed and put to use in advance, has been gaining wider acceptance.

Smartphones are a successful example of this.

Full-scale redesigns of smartphones have been timed to coincide with the introduction of new hardware technologies, such as the adoption of larger displays, the dawn of ultrahigh-resolution organic electroluminescent displays, and the use of foldable screens. Yet, without waiting for such timing, operating systems and applications can expand the functions of smartphones through updates while using the same hardware.

If we were to express this in terms of car-making, complete redesigns would be when we have our customers replace their cars with new ones upon our updating the hardware and delivering value by doing so. Other improvements, such as partial redesigns, would be when we offer new functions and new value by updating the software while owners continue to use the same hardware.

Easy-to-understand examples of this can be found in advanced technologies, such as advanced driving assist functions, for which software and data are key. By having the basic software first in place, we could collect real-life data to heighten the level of our AI and could then at some point add functions in the form of updates. Things such as this will become possible.

I believe that becoming able to think of partial redesigns along the lines of software updates will enable Toyota to more fully apply the strengths of its hardware.

I see there being three strengths to Toyota's hardware.

One is durability―the soundness of our hardware.

Next is parts availability―the ease of access to replacement parts.

And finally, we have repairability―the ease of repair.

If the software is the latest on every occasion and if the hardware is used over a long period of time, these three strengths can be demonstrated even more to the fullest.

And, actually, it is the positive evaluation of these three strengths that has led MaaS operators who are our collaborative partners to choose Toyota vehicles.

I believe that applying the strengths of our hardware and adopting the thinking of "software first" will enable us to innovate Toyota car-making to the next phase.

Another major change necessary for Toyota's rebirth is one that Toyota cannot address on its own. This is the change in the role of the automobile itself.

About 10 years ago at the 2011 Tokyo Motor Show, Toyota exhibited a concept vehicle called the "Fun-Vii". At that time, I said: "This is the kind of car we came up with when we put four wheels on a smartphone."

My thoughts were that, in addition to "running, turning, and stopping", adding the function of "connecting" allows cars to give birth to new value.

Then, seven years later at CES in January 2018, we unveiled the e-Palette.

The e-Palette was a new attempt to see what will happen if software engineers at TRI and Toyota Connected made a car. Next, thinking that we needed roads on which the e-Palette could run, came the idea for Woven City.

For Toyota, Woven City means changing by 180 degrees how we look at and think about the things around us.

Shifting from the conventional notion of: "First, there are cars and there are houses. Let's connect them," to the notion of: "A broader concept is to connect cars and houses to the communities in which people live." I think that accomplishing this means greatly innovating how we work. This is why Toyota is engaging in the creation of a "city platform".

Through the advance of connectivity and the advance of IoT, cars will cease to be simply objects of personal ownership or a means of getting around. They will become structural elements of the societal system itself. The role that the automobile must fulfill is starting to change.

For example, in times of emergency, cars will become emergency power sources, and, through their sensors, they will provide society with useful information such as hazard maps. Various possibilities are now coming into being. Hence, this will result in the evolution of cars having a close relationship with the evolution of society.

I believe that NTT is a partner who can best put to use cars that are incorporated into the societal system. That is because NTT's operations are directly connected to the creation of society. The various forms of infrastructure that construct society are supported by the information infrastructure that NTT provides.

Expressing this in terms of the human body, I think that cars and houses are like muscles and bones, respectively, while communications are like veins through which flows the blood of information. Among such, NTT, as the main artery, supports blood circulation all the way to the capillaries, moving the entire body. In other words, NTT bears on its shoulders the foundation of the societal system.

Making car-making based on "software first" a reality and building the future of cars linked to the societal system of communities, as I have just mentioned… And then doing so on a corporate scale and undergoing a complete redesign, in the way that I put it, from being a company that makes cars to being a mobility company, that is to say, a company that provides all types of services related to mobility...

When it comes to corporate groups undergoing complete redesigns, NTT is a pioneer.

At first, telephone circuits used analog communications, and, I hear, switching among signals was done by switching equipment that used mechanical connections.

Later, along with the digitalization of communications, such switching equipment was replaced by routers, and software came to control communications. Furthermore, the cellphone led to a society in which people could connect anywhere, regardless of where they were, and then communications went beyond the simple function of telephone calls to become a platform for giving birth to new data services and new businesses.

NTT implemented a complete redesign to transform the hardware-based business structure of its entire corporate group into one based on software. It constructed platforms for telecommunications and information processing, such as NTT Communications and NTT Data. Furthermore, it established a company responsible for its software operations, and, as an "integrated information telecommunications company" engaged in a broad spectrum of activities, including the provision of data services and solutions, NTT has endeavored to accelerate innovation.

Currently, NTT is leading the world in verification trials and in advanced research related to the creation of communities of the future, such as through its efforts related to smart cities, its IOWN concept, and others.

For Toyota to respond to the two changes I mentioned―the change in how software is positioned and the change in the role of the automobile―and undergo a complete redesign into a mobility company, our alliance with NTT is essential and, in a way, kind of inevitable, I am apt to believe.

And I think we will continue to search for additional friends. At the base of our alliance is having an open mind. Wanting to make the future brighter together with many friends is an aspiration shared by both of our companies.

Finally, I would like to talk about my thoughts, which are part of the foundation of this alliance.

Please have a look at this graph. (Japanese consumer spending per household)

If we look at expenditures per household during the 30 years of the Heisei era, we will see that, while total expenditures did not increase, spending on transportation and telecommunications increased from the 10 percent to 15 percent.

In a survey of family budgets in which both transportation and telecommunications somehow handily fall into the same category, compared to the Japanese automobile market, which peaked during the period covered, spending on telecommunications greatly increased.

Looking at this graph made me keenly feel that automobiles have to give it another earnest effort and that, if automobiles are a key Japanese industry and a growth industry, then they must become more of a presence that brings people happiness.

At the top is "The Last Wishes of Sakichi Toyoda", which refers to the Toyoda Precepts. Among those precepts is the spirit of being "contributive to the development and welfare of the country".

From the time of successfully undergoing a complete redesign from a loom manufacturer to an automobile manufacturer, and continuing all the way to the present, at the foundation of Toyota is a strong desire to contribute to the prosperity of society and of one's country.

Creating the society of the future requires much energy. In this period of profound transformation, in which it is difficult to see what lies ahead, and because it is a period of yet-to-be-known answers, I believe it is important that private enterprise, with a will to do something for one's own country, rouses itself to action armed with technological capabilities and talented human resources for creating the future.

NTT and Toyota both have the spirit of lifting Japan. If we, while surrounded by many friends, are able to build a platform that can support a prosperous life for people, not only would we be able to be useful to society, we would also be able to contribute to raising the presence of Japan in the world. That is what I believe.

And along with "The Last Wishes of Sakichi Toyoda", there is also "The Dreams of the Previous President" and "The Manufacturing of a Domestically Produced Car for the Masses".

The same can be said for the telephone. Following the days long ago when it wasn't even guaranteed that each home would have its own telephone, today, whether it be in economically established countries or in countries that are up and coming, we have arrived at an age in which it is a matter of fact that each person has his or her own smartphone or other telecommunications device.

Behind the words "car for the masses" is a desire to achieve mass production―meaning a desire to deliver happiness to all people.

Both Toyota and NTT are global companies rooted in Japan. When I say: "all people", that means being active around the world.

And "people" are positioned right in the center of the future that both companies envision. Some people have smiles on their faces. "People connected". That is the society of the future for which we are aiming.

Even when I met President Sawada for the first time, with his sincere personality, I could keenly sense his stance for caring for people. I genuinely felt: "This is a person on whom I know I can depend."

I humbly request your support for the future that we are striving to achieve. 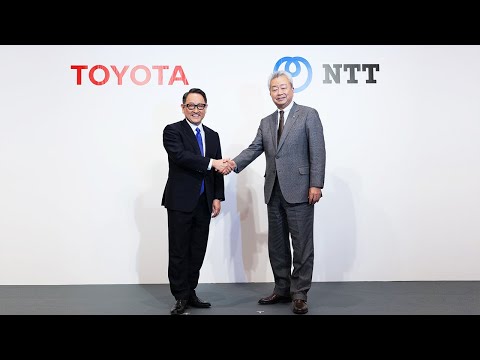