Toyota Develops New Paint Atomizer with Over 95 percent Coating Efficiency, Highest in the WorldContributing to the reduction of CO2 emissions and the popularization of coating technology

Toyota City, Japan, March 12, 2020―Toyota Motor Corporation (Toyota) has developed a new type of paint atomizer (airless paint atomizer) that uses static electricity instead of air, to replace the conventional air paint atomizers used in the vehicle body painting process. The newly developed airless painter, the first of its kind in the world*, achieves over 95 percent coating efficiency (the amount of paint sprayed versus the amount that actually adheres onto the vehicle body), the highest in the world*, from conventional efficiency of approximately 60 to 70 percent.

By deploying the airless paint atomizer in Toyota Group's painting process, it is expected that the Group can reduce its CO2 emissions by about 7 percent. In addition, the collection device situated at the bottom of the paint booth (the area where paint is sprayed) can be made more compact. Therefore, it is able to make painting production lines more compact for the future.

Toyota is advancing initiatives to achieve its Plant Zero CO2 Emissions Challenge, one of the targets included in the Toyota Environmental Challenge 2050 announced in 2015. As part of this effort, it developed the airless paint atomizer and deployed it at both Takaoka and Tsutsumi Plants. Gradual deployment at other plants is planned as well as consideration of deployment among other Toyota Group companies and licensing the technology to other companies.

Electrostatic atomization technology is used in beauty treatment devices and other instruments that spray fine amounts of liquid; here, we applied it to vehicle body painting. Specifically, the tip of the paint sprayer is cylindrical. Approximately 600 special grooves are inserted into the tip, which is rotated to create a centrifugal force, inducing the paint to flow into the grooves and atomize through static electricity. In this way, we developed the world's first technology that paints vehicle bodies with atomized paint particles using static electricity.

*As of March 2020, according to Toyota Motor Corporation. 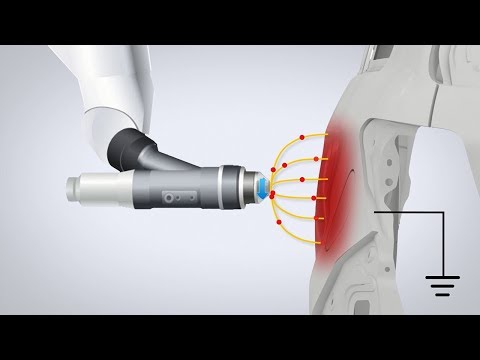